Here at Master Key Systems MKS UK Ltd, we’re proud to introduce our new TS0071* High Security Adapta Prime™ cylinders to our already hugely popular Adapta range. As well as being fully compatible with our Adapta J40 restricted range, the new Adapta Prime™ TS007 1* cylinders are characterised using the widely recognised Star rating, which would be a great addition to your existing Master Key System with high-security features such as anti-snap, anti-bump and anti-drill as standard.

The TS007 1* security standard is an industry response to growing concerns that properties are under increasing threat from burglars who are learning methods such as snapping, bumping and drilling online. Lock snapping is a method of forced entry which involves applying a strong torque force to the lock cylinder (usually with a pair of locking pliers) which breaks the mechanism and allows access to the latch. It can take between 50 seconds and 2 minutes to snap a lock and gain entry. Lock snapping is possible because of a weakness in the cylinder where the retaining bolt passes through a thinner part of the lock. Anti-snap cylinders, such as the TS007 1* Adapta Prime™ cylinder, have a front sacrificial section that snaps off the main body, leaving the rest intact to prevent access to the opening mechanisms.

Lock bumping is a lock picking technique for opening a pin tumbler lock using a specially crafted bump key. A bump key must correspond to the target lock to function correctly. With a combination of the design and shape of both the key and the cylinder itself, the TS0071* Adapta Prime™ also has the anti-bump security feature.Drilling a lock is a destructive and very unsubtle way to gain entry. It is done by drilling straight into the cylinder plug and using a flat headed screwdriver to turn the lock like you would with a key. This will destroy the lock and only takes a couple of minutes. Our TS007 1* Adapta Prime™ cylinders have two anti-drill barriers. The first has three case hardened steel pins encased in the plug and the second has two further case-hardened steel pins hidden just past the third pin behind the sacrificial line of the body.

The pin tumbler lock is a mechanism that uses pins of various lengths to prevent the lock from opening without the correct key. They are most commonly found in euro cylinder locks but can also be found in oval cylinders and rim cylinders.The basic principles of these locks date as far back as 4000BC in Egypt, but the earliest patent was granted in 1805 in England. In 1848, the modern pin-tumbler lock was invented, but over a decade later a smaller flat key with serrated edges, as well as pins of various length within the lock itself, was invented and patented and is the same design used in both our Adapta and TS007 1* Adapta Prime™ ranges.

Pin tumbler locks have an outer casing which has a cylindrical hole in which a plug is housed. To open the lock, the plug must rotate. The plug has a keyway at one end to allow the key to enter and the other end may have a cam or lever which activates a mechanism to retract a locking bolt. The keyway often has protruding ledges that prevent the pins from falling into the plug and to help make the lock pick resistant.

Above each pin is a corresponding set of driver pins, which are spring loaded. Locks requiring multi-keyed access, such as a Master Key System, have extra driver pins called spacer pins.When the outer casing and the plug are assembled, the pins are pushed into the plug by the springs. The point where the plug and cylinder meet is known as the shear point, and when a correct key is inserted into the lock, the pins will rise and align exactly at this point. This allows the plug to rotate enabling the lock to open. 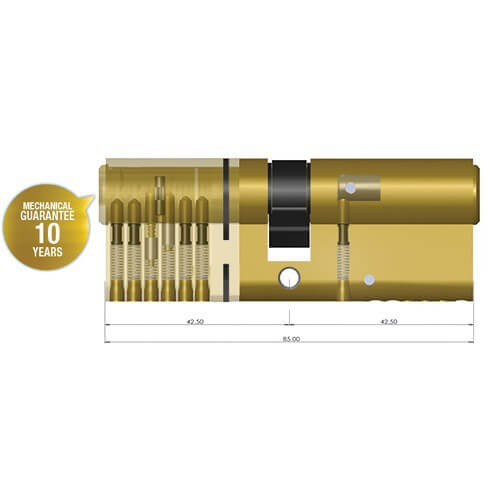 The main advantage of euro cylinders is that cylinders can be easily changed without the need for alteration to the door hardware. Removing a cylinder typically requires the removal of a screw, then sliding the cylinder from the door. The second advantage of euro cylinder locks are that they are readily available in a variety of sizes, finishes and different formats that can be used with the same type of key.

This allows the user to choose a keyed-alike or Master Key System that combine a wide variety of different types of locks and even padlocks. Our TS0071 *range of Adapta and Adapta-Prime™ cylinders are available in a variety of different sizes and finishes we well as keyed-alike, as a padlock or as part of a Master Key Systems. We also supply a range of other cylinder types such as Oval and Rim cylinders.

A Master Keyed lock is a variation of the pin tumbler lock that allows the lock to be opened with two (or more) different keys. This type of system is mainly used in commercial buildings with multiple tenants such as offices, apartment blocks, schools and care homes.

Each tenant is given their own unique key which only unlocks their own door (which is called the differ key), and the second key is the Master Key. The Master Key unlocks all the doors and is usually kept by the building manager so they can enter any room in the building as and when needed.

With an individually keyed system, each cylinder will only be opened by its own unique key. A keyed alike system allows different cylinders to be opened by the same key and is ideally suited for residential and commercial applications such as front and back doors. A common entrance suite is widely used in apartment blocks, offices, care homes and schools.

Each apartment (for example) has its own individual key that will not open any other apartment doors, but also opens common entrances such as entrances or communal areas. A Grand Master Keyed system is an extension of the Master Key System, where each lock has its own unique key, but the locks are divided into 2 or more groups.

Each lock group is operated by a Master Key and the entire system is then operated by a Grand Master key. This is normally used in complex commercial systems or HMO’s and schools.

All the systems above are available within our new TS0071* Adapta Prime™ high security range as well as the existing Adapta range, whether you’re after a simple Keyed Alike system or a more complex Grand Master Keyed System.