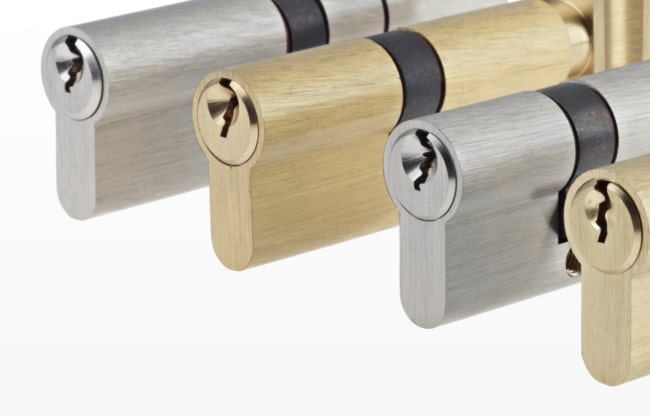 A Euro Cylinder lock, or ‘pin tumbler lock’ (as it was originally known when patented in 1805), is used primarily as a locking medium to operate a lock case. Euro Cylinder locks are today’s most popular locking system amongst locksmiths and architectural ironmongers.

There can be many levels to a cylinder master key system. A basic system is where all cylinder locks are opened by a single Master Key but each of the door cylinders are opened by their own key often referred to as the slave or differ key.

This system is typical for a HMO or Landlord whereby the Landlord wants his own single master key to open all the locks, but to ensure that the tenant has a differ key that is unique to their own door.

Very often, the Landlord will also have a Cylinder Lock fitted to the main door. This door cylinder can be opened by the Master Key and each of the tenant's keys and this is referred to as a common entrance. Whilst this is not recommended, it is by far the most convenient Master Key System for HMO’s and landlords.

What Does Keyed to Differ Mean?

When a lock is made to ‘differ’ it means that every cylinder has a different key, and so one cylinder’s key will not operate another. The Oval Profile, or British Oval Profile, works on exactly the same principle as the Euro Cylinder lock but instead features an oval shape rather than a euro profile shape.

What Does Keyed Alike Mean?

When a lock is ‘keyed alike’ it means that the lock is identical to another (or many) thus meaning one key will operate all locks that are ‘keyed alike’. This is Different to a Master Keyed System, whereby each door may have its unique key, but a ‘master key’ may still operate differed locks. Keyed alike groups are quite common in larger Master Key Systems typically for Risers or communal doors.

The UK’s Leading Door Cylinder Specialist for over 25 years

The Security of Modern Locking Systems

Traditionally Cylinder Locks were measured excluding the operating cam, for example, a 60mm euro-cylinder would be specified as a 25/10/25 the 10 being the dimension of the cam.

Today this is not so common. With the advent of PVCu doors and large security doors, it has brought about the need for offset cylinder door locks. As an example, a 100mm cylinder could be split 40/60, i.e. from one end of the cylinder to the centre of the cam it measures 40mm and from the other end 60mm.

This change in the market has required the manufactures such as Master Key Systems MKS to ensure they carry a range of offset euro cylinder locks, capable of being Master Keyed.

By far the most specified Euro Cylinder is the Cylinder and Thumb Turn or key & turn. This has key access on the outside, with a thumb-turn on the inside used for locking and unlocking the door lock.

This type of cylinder is an absolute must when fitted to a final exit door in any public or managed spaces or accommodation. As with all other euro cylinder locks, a cylinder with thumb turn comes in a variety of sizes, both equal splits and offsets.

Euro Cylinders Can Vary in Length

on The Euro Profile Cylinder, or Euro Lock Barrel as it is sometimes referred to, is available in a variety of lengths. Single or half Euro Cylinder locks typically range from 40mm to 50mm, whilst Euro Cylinders range from 60mm up to 120mm as standard, equal lengths from the central cam.

For example, an 80mm length standard Euro Profile Cylinder lock will measure 40mm either side of the operating cam.

With the advent of PVCu doors; unequal or offset Euro Cylinder locks have become the norm. Sizes vary from 70mm up to 120mm.

For example, an 85mm lock will measure 40mm from one side of the cam and 45mm from the other side.

Some Euro Cylinder Locks feature ‘thumb turns’ or ‘knobs’, meaning that a key is not required to operate the lock from the inside the property, this is particularly popular with fire authorities as they deem thumb-turn locks safer to use on fire exits.

A large variety of thumb turns have been developed over the years to allow them for use in a diverse range of commercial and domestic buildings where the users have limited mobility or conditions such as Arthritis. Here at Master Key Systems, we’ve developed a range of cylinders including a DDA-standard disabled thumb turn that fits both euro profile Cylinders and oval profile cylinders.

How the Euro Cylinder Has Developed Over the Years

One of the first developments made to the ‘pin tumbler lock’ was the introduction of anti-drill locks. Designed to prevent criminals from drilling into the ‘core’, or, ‘plug’ of the Euro Cylinder. It also prevented drilling below the plug into the body of the Euro Cylinder, where damage could be done to the spring drivers and operating pins.

Just like in modern times, people would accidentally lose their keys, and so locksmiths were required to pick doors open for their customers. The criminal fraternity soon spied an opportunity to break into properties by picking Euro Cylinders, and so new measures had to be taken. Anti-pick locks were developed and soon became the norm.

Many key types have been designed for use with Euro Profile cylinder locks, mostly created by manufacturers attempting to set trends with patented designs. However, designs that weren’t protected by patents were ultimately copied and an industry was created supplying key bars and locksmiths with key blanks. As the demand for euro cylinders grew, they became more readily available.

Keen to be one step ahead of criminals looking to exploit weak locking systems, the industry introduced British Standards to encourage manufacturers of Euro Cylinder Locks to improve not only their reliability but also its actual security level. In common with responsible manufacturers, Master Key Systems secured BSEN 1303 2005 on its range of Euro Profile Cylinders.

The BSEN 1303 2005 standard ensures minimum levels of reliability and degrees of security depending on the standard achieved during testing. This was to be the start of a new era for Euro Profile Cylinder Locks. A new standard was created to offer the many users of Euro cylinders a wider choice depending on the application i.e. low-level risk to high-level risk of break in.

Still Unsure? We Can Help!
Submit a Query and We'll Get Back to You